When “nothing” goes missing

As promised, the full version of the paper I recently presented at the Society for Textual Scholarship conference is linked below. I’ve revised it slightly, both in response to the wonderful feedback I received at the conference and to make it more readable, as it was originally intended to be heard. Please forgive the clunky documentation; I believe it is complete, but, as so often happens with conference papers, it is rather ungraceful.

Although I don’t have immediate plans for this piece, questions of censorship will certainly continue to be a part of my general inquiry into Crooke’s book, and I welcome further insights/questions, etc. As soon as I find time, I’ll be following up on Whitney Trettien‘s excellent suggestion to take a look at some anatomical flapbooks, such as the Hardin Library’s Johann Remmelin’s Catoptrum microcosmicum (1619) here at the University of Iowa that Whitney has blogged about.

While in Seattle for the PAMLA conference, I was able to make a brief visit to the Health Sciences Library at the University of Washington to view their copy of the 1651 edition of Crooke’s Mikroskomographia. Although I didn’t have time (or the resources handy) to closely compare the text itself (by which I mean the words that comprise the body of the work – is “text” the correct term?), I did notice several other distinct aspects of this edition and this individual book.

For one thing, the 1651 edition includes several new illustrations. Most striking is the completely made-over title page, part of which I’ve mentioned in an earlier post. This title page also appears on the 1631 edition (and perhaps others; I suppose one thing to add to the “to-do” list is a catalog of title pages among editions). 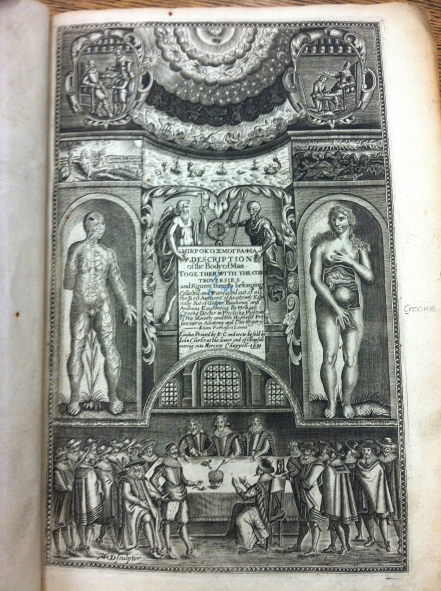 I apologize for the poor image quality; while my iPhone camera actually does quite a fine job when given the chance, I was in a bit of a hurry, and ended up with several blurs. I do have better photographs of each of the individual sections.

There are many interesting images packed into the tight space, and I’ll spend another post examining each more closely, including the tableau at the bottom which, supposedly, includes a portrait of Crooke himself. What I found most unfortunate about this UW copy is that the library has placed their identifying stamp directly on the back of the title page, causing the bright blue ink to bleed through right in the middle of the text at center. I mentioned this to Donna Hirst, curator of the John Martin Rare Book Room at the medical library here at UIowa. She explained that some sort of permanent identifying mark is necessary in case the book should be stolen; however, she agreed with me that the placement of the UW stamp was a travesty. I wonder if perhaps they were worried the title page itself might be torn out, given that it’s arguably the most interesting visual in the book. Although I’d rather see it some place more unobtrusive, I do like the idea of a permanent mark being placed on the book by each and every one of its owners, as a matter of provenance as well as narrative—it’s part of the book’s own story.

The images within the 1651 Mikrokosmographia also vary from the 1615 edition. There are new additions, as well as alterations to existing illustrations. One of the most striking changes to previous images that I noticed involves the illustration of the female reproductive system; the original detailed illustration of the genitals has been erased into a featureless blob. 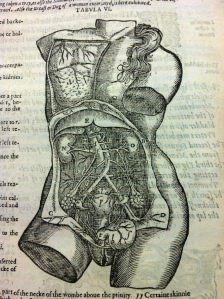 Given that Crooke’s original inclusion of such explicit images caused vehement protest, but he insisted on printing them anyway (apparently to no consequence), I was initially surprised to see the more demure version in this later edition—until I double-checked my dates. Crooke died in 1648, meaning this later edition was published three years after his death. Thirty-six years later, the censors gained some ground, although I can’t help but think of this victory as rather little, and awfully late. I’m anxious now to check the intervening editions for this image.

The lower half of Crooke’s title page features the images of two bodies, one male and one female. Like the rest of Crooke’s illustrations (and much of his text), these originated in other sources, “the veined man from a zodiacal chart on phlebotomy and the woman from an almanac,” according to Elizabeth Lane Furdell in Publishing and Medicine in Early Modern England (52). C.D. O’Malley, who sees the inclusion of these images on the title page as a blatant flaunting of Crooke’s defiance in regard to the book’s attempted suppression, identifies the illustrations as “a male and a pregnant female figure borrowed from Bauhin’s Theatrum anatomicum, the latter one of the so-called indecent figures previously condemned by the College” (8). That these sources cite different origins for the illustrations may be due to differing images in subsequent editions; the 1631 Mikrokosmographia title page is much more intricate but still includes the two figures. The female appears softer but retains her previous posture and form, while the male undergoes more significant changes; although he remains veined and inexplicably one-armed, his veining is less detailed (appearing more stylistic and less scientific), he is turned to face the center of the page, and a conveniently placed lily grows to cover his more potentially offensive parts. This may have appeased Crooke’s more prudish readers, but there is an odd juxtaposition in revealing the man’s circulatory system while veiling his external genitalia.

A photocopy of the reproduction of the engraved 1631 title page provided by O’Malley in his Bulletin of the History of Medicine article and credited to the “Wellcome Trustees”; the image no doubt originates from a copy held by the Wellcome Trust in England.

Although there appears to be little in the image to verify that this is, indeed, a pregnant woman (as O’Malley notes), the same illustration does appear in the volume’s Book Four, “Of the naturall parts belonging to Generation,” where it is labeled: “Table x. sheweth the portrature of a woman great with child whose wombe is bared and the Kel taken away, that the stomacke, the guttes and the wombe might bee better seene” (V6v). According to the OED, “kel” is more commonly spelled “kell” and, given this context, would refer to “the fatty membrane investing the intestines”; this is what later becomes the word “caul” (although the alternate spelling “calle” also appears as early as 1382). In any case, this female figure is certainly an excellent example of the “self-demonstrating” anatomy subject Jonathan Sawday describes in The Body Emblazoned (113), as she coldly offers her best-kept secrets to the reader’s gaze.

* As always, for complete bibliographic information on the sources used in this entry, see Further Reading

This work is licensed under a Creative Commons Attribution-NonCommercial-NoDerivs 3.0 United States License.